All prices on this website are shown in British Pounds

If you wish to View & Pay in USA dollars CLICK HERE

This amazing talisman, is actually two of King Solomon’s most successful protection talismans combined in one powerful talisman. A very powerful and highly protective Angelic Shield when you need it.

This extremely protective ancient talismanic pendant was originally designed in the age of miracles over 3000 years ago, by the biblical King Solomon, with the aid of the Archangel Haniel.

Also known as the Angelic shield of Solomon, this powerful ancient talisman was designed over 3,000 years ago by King Solomon, with the aid of the Archangel Haniel. Its holy script is written in the celestial Angelic language of creation, and calls on the Angels named on the talisman to befriend its owner and bless their life with the gift of divine Angelic protection on all levels both physical and Spiritual.

Our Master Adept creates and empowers this powerful ancient talisman in full adherence to the celestial formulae and holy rituals originally disclosed to King Solomon by the Angel Haniel and outlined in the famous Clavicula Salomonis manuscripts.

Your talisman is supplied fully empowered and ready to wear. There is nothing whatsoever for you to do on receipt of your talisman. Simply wear or carry on your person to instantly attract the talismans associated life enhancing Angelic good fortune and blessings. 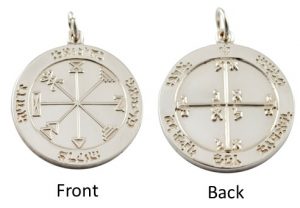 This powerful protection talismanic pendant was originally designed in the age of miracles over 3000 years ago, by King Solomon with the aid of the Archangel Haniel. Its holy script is written in the celestial Angelic language of creation, and calls on the Angels named on the talisman to befriend its owner and bless their life with the gift of divine Angelic protection on all levels both physical and Spiritual.

Ownership of King Solomon’s Angelic protection talisman assures its owner of direct Angelic help and protection when confronted with aggression and physical danger. Ownership acts as a divine Angelic shield when in the presence of negative people or evil entities and helps protect its wearer from physical and Spiritual danger, all Evil, and Low Spirits. Created with the aid of the Archangel Haniel, its sacred script declares:- the Lord at thy right hand shall protect you from all danger and evil. If thou art attacked by anyone or any evil entity, thou shalt neither be injured nor wounded, for your attacker’s weapons and evil shall be turned against them. This unique talisman gains its protective Angelic powers by using the creative forces of Solomon’s Fourth and Sixth Celestial Pentacles of Mars, on the front and back of this talismanic pendant. It respectfully calls on the Angels named on the talisman to befriend the talisman’s owner and bestow on them the gift of divine Angelic protection from all physical danger, and requests that the Angels themselves act as an Angelic shield against all evil things including demonic entities.

Ownership of King Solomon’s Angelic protection talisman also assures its wearer of direct Angelic protection from the new worldwide Phenomenon known as the Black-Eyed Children. These black-eyed soulless entities, in the form of children, are increasingly walking unnoticed among us, feeding on our life-force, and causing fatal illnesses and chronic dark depression. A quick Google search will shock you to see how prolific the worldwide encounters with these demonic entities have become in recent years. They are reported to take the form of young children who try to trick or intimidate their victims into inviting them into their home. They are reported to usually appear at one’s door late at night, or sometimes a car door just as their victim is about to get out of the car, and at first appear to be two lost children. They are said to project a terrifying hypnotic aura making it extremely hard for their intended victim to resist their request to enter their home or car. Eye witnesses have described them as having blond hair, with very pale, dead looking skin and black soulless eyes. At present, we know very little of their true intentions, as the only people who have reported their terrifying encounters are the lucky ones who have escaped. To date there is not a single report from any person who has actually allowed these black-eyed demonic creators to enter either their home or car, so what happens to these people we can only conjecture and say a pray for their souls.