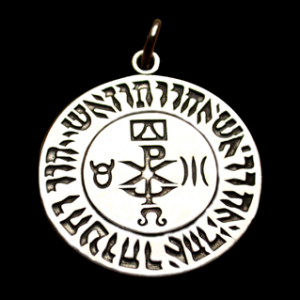 Benefits and Protection associated with ownership: This powerful amulet is the most effective and highly protective Angelic amulet we have known. All evil forces and negative situations are instantly banished from its divine cleaning light and lose all their power in its presence. Violent and aggressive people cannot stand to be in the presence of this Angelic amulet. All black magic and evil spells are immediately reflected away from the owner of the amulet and returned to plague their creators.

Your Chi-ro protective amulet is supplied by our Master Adept fully empowered and activated. There is nothing whatsoever for you to do on receipt.

All our talismans are supplied by our Master Adept fully empowered and activated. There is nothing whatsoever for you to do on receipt of your talisman. There is no need to even wear your talisman. Simply owning it will instantly attract the talismans associated life-enhancing Angelic benefits and blessings into your life.

Please Note: Prices shown in our talisman booklet supplied with orders are slightly lower than those shown on this website. This is because the booklet was printed before the recent massive global price increase in the cost of gold and silver.

Adept of the Circle of Raphael regards this powerful talismanic amulet

as the most effective and highly protective Angelic Amulet in history

Our Chi-ro Amulet is truly a most remarkable and highly protective Celestial item. Its possession assures its owner of Angelic protection from all real danger, both physical and spiritual, and promises Angelic assistance against all negative forces including Negative Witchcraft, the Evil Eye,  Lower Astral Forces, Djins, black magic and negative, aggressive people. A True Divine Cleansing Light: The Chi-ro amulet carries within its holy invocation the almighty cleansing word of the  creator and the awesome protective power of his holy Angels. It is written that all evil is banished from its divine cleansing light and that no evil thing or person can exist or have power in its presence.

Go in peace without Fear or Hindrance: We highly recommend our holy Chi-ro amulet for anyone wishing to request the Angelic blessings of divine protection and Angelic help against negative forces and acts of evil, including acts of violence and war. It is known that violent and aggressive people cannot stand to be in the presence of this holy amulet. Its protective aura causes them to feel nauseous and compels them to move out of sight of its owner. The Outer Circle of this sacred amulet contains the most sacred names of the Creator and his blessed Angels. In the centre is the divine Chaloth Ha Kadesh and the X shaped monogram of the  Christ, the most holy and protective symbol of all time. Ownership of our sacred Chi-ro amulet is understood to surround its owner with a protective Angelic light and is equivalent to wearing a suit of protective spiritual armour.

A word from our master Adept. The X part of the Chaloth Ha Kadesh, is known to cause all evil, both physical and spiritual, to fall back from its divine cleansing light and forces it out of the pathway of the wearer. The X represents the true cross on which the Christ was crucified. The Romans did not use the T shaped cross.  This is a misunderstanding that came about in Early medieval Europe after the fall of the Roman Empire. In reality Romans used two large pieces of wood crossed into the X shape. Early Christians knew this because they had witnessed Roman crucifixions with their own eyes. The Apostle Peter, the first Pope, choose the X shape Chi-ro to symbolise the death and resurrection of the Christ. All cars used by today’s Popes carry the X shaped Chi-ro symbol – many believe that it was its protective power that protected the 61 year pope John Paul II from certain death when he was shot four times by an assassin in 1981.

Other customers who bought the Chi-ro protective Amulet have also bought our Powerful King Solomon’s Angelic Protection Talismanic Amulet BELOW.