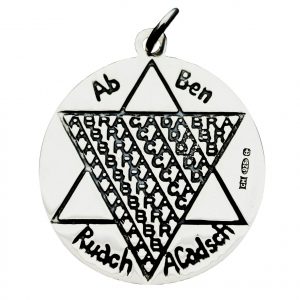 Supplied with a FREE matching solid sterling silver chain worth £13.95 in a quality presentation box.

Wear or carry this powerful protective ancient Amulet to banish bad luck and greatly diminish all negative energy and negative situations from your life. Misfortune and stressful situations are compelled to first diminish and then completely vanish from its owners life path.

All our talismans are supplied by our Master Adept fully empowered and activated. There is nothing whatsoever for you to do on receipt of your talisman. Please Note: there is no need to even wear your talisman. Simply owning it will instantly attract the talismans associated life-enhancing Angelic benefits and blessings into your life.

Place any order whatsoever worth £49 or more and you will receive a FREE talisman. CLICK for details.
Add to Basket

Abracadabra is probably the best known of all the ancient Angelic talismanic devices. Created in biblical times for the benefit and well-being of all humankind by the elite holy men known to history as the Magi, its proven ability to compel all negative situations to diminish and vanish is legendary. The word Abracadabra is used today by stage magicians whilst performing sleight of hand. This is, however, very far from its original use as a divine Angelic incantation used to call on the celestial beings of light known as Angels to force all negative situations and misfortune to vanish from the life path of its owner, in the same way as the sacred word Abracadabra itself appears to shrink and vanish in the centre of the amulet.

In ancient Persia, Abracadabra amulets were also employed as a protection against disease and ill health. This seems logical, as anything with the power to make a negative situation shrink and vanish is sure to prove highly successful as both a prevention and a cure for ill health. However the Abracadabra amulet was originally created to be far more than a divine protection against ill health. The Magi holy men who initially created it, designed it to cause all negative situations and experiences to continually diminish and finally vanish completely from the life path of the amulet’s owner. The Magi intended that this gift of freedom from major stress would enable its owners to concentrate their efforts on the important things in their life, and achieve true spiritual immorality by living a happy and interesting life that would be a joy to remember.

The front of the Abracadabra amulet forms an ever diminishing holy mathematical incantation with the spiritual power to force all negative situations and misfortune its owner may encounter to vanish and perish in the same way as the sacred word Abracadabra itself appears to shrink and vanish. The front of this amulet also uses the secret names of the holy trinity Ab – Ben – Rudch Acadsch {Father – Son – Holy spirit} to attract spiritual blessings and divine protection to anyone fortunate enough to possess this unique ancient amulet.

The back of this holy Angelic amulet calls on the Angels Raphael and Haniel to promote the good health and general well-being of its owner and also calls on the spiritual life force of the four elements to keep its owners mind, body and spirit in perfect harmony and spiritual balance.

The Abracadabra amulet has a multitude of uses and is acknowledged as having the power to reward its owners with a host of celestial blessings as well as the gift of divine Angelic protection. In modern times our Abracadabra amulet has proved highly successful and beneficial for people in stressful domestic situations, and those suffering employment related stress. A number of clients prone to depression have reported that within a few weeks of acquiring their Abracadabra amulet they experienced a deep inner calm, and started to feel less stressed; the mental blackness in their life had evaporated and they found it much easier to control their mood swings. The Abracadabra amulet has been placed in cars and all kinds of transport as a protection against accident and theft. Worn or carried on the person it has been used very successfully to call on the Angelic beings of light known as Angels to cause negative and dangerous situations to diminish and vanish from the life path of its owners.