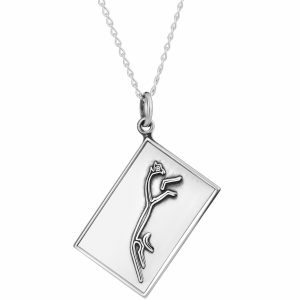 Celtic Irish Good Fortune in the palm of your hand

Wear to attract the auspicious, benign influence of Jupiter, the planet associated

with Earthly Luck and Good Fortune

Supplied with a FREE 20 inch  solid sterling silver chain worth £15.95 in a quality presentation box.

Please Note: We only have 7 of these limited edition lucky Celtic Wishmaker magical Horse Charms left.

Horseshoes are a well-known good luck symbol dating back to the time of the ancient Celts. However, it was the magical influence of the white horse charm over and above that of the horseshoe that the Celts associated with good fortune. The Celts associated the magical power of the white horse charm with the auspicious solar spirit of Jupiter (the luck planet), and they wore it to attract Jupiter’s benign influence. It was said that its wearer would become lucky in life and in all matters of the heart.

In Irish tradition, the otherworldly beauty Niamh of the Golden Hair fell in love with the Irish hero Oisin of the Fianna. Niamh travelled to Ireland on a magical white horse to declare her love for Oisin. Setting eyes on her beauty, Oisin fell madly in love and the two rode off together to Tir na nÓg. There they were married and had two sons and a daughter. In Irish tradition, Tir na nÓg is a paradise of everlasting youth, beauty, health, abundance and joy. Beauty, health, abundance and joy are said to follow the owners of the magical Wishmaker white horse charm. This is a great gift idea for anyone who has a desire for adventure and who is open to new and unique life experiences.

We only have 20 of the Boar charms and 19 of the Salmon charms left.